Alistair Darling and the RBS

Why are politicians in the No campaign so unwilling to answer questions from members of the public? I have tried on various occasions and each time, the reply, if it came at all, completely ignored my questions. The most recent example of this comes from Alistair Darling.

Now Mr Darling is apparently the leader of the No campaign and is rarely absent from our broadcast media. Constantly asking the Yes campaign to provide clear answers. Yet when he is asked to provide some clear answers, none are forthcoming! Recently I sent him an email in his capacity as leader of the Better Together campaign. I wanted clarification about comments he had made on the Sunday politics Scotland programme which was broadcast on 29th September of this year. In it he repeated the claim that an independent Scotland would not have been able to save the Royal Bank of Scotland at the time of the financial crisis way back in 2007/08. I have always regarded this oft repeated assertion as one lacking any substance. 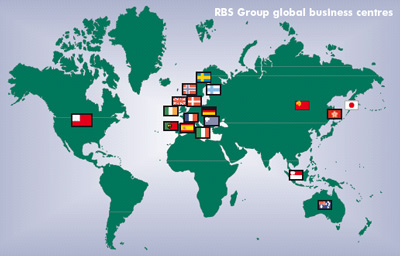 Though its HQ is in Edinburgh, RBS is not in any real sense a Scottish bank. When you check their web site you find that the bank describe themselves in the following terms, “The RBS group is a large international banking and financial services company.” (my emphasis) The RBS group has around 33 million customers globally. This equates to around:
24 million in the UK
3 million in Europe
5.4 million in the US
0.4 million in Asia.

Furthermore, across all their brands, they have around 3,700 branches globally:
around 2,200 in the UK
around 1,400 in the United States
around 160 in the rest of the world.

So, it is clear that a lot of money was needed to save the Royal Banking Group. However as they themselves make clear, they are an international company and not just a Scottish company. Indeed their chairman informed a UK parliamentary committee that only 3-4 per cent of the RBS group’s customers are in Scotland. Most of its UK customers will be with the National Westminster, which is an English bank and registered in London. The bit that operates up here in Scotland, the retail bank with branches all over Scotland – The Royal Bank of Scotland – is only a very small part of the RBS group, with around 300 branches in Scotland.

In light of these facts, I wanted to know why the government of an independent Scotland would have been expected to bail out the whole RBS group all on its own? If Scotland had been an independent country, would it not have been the rUK government in London which would have taken on responsibility for RBS group’s operations in England, Wales and Northern Ireland? Particularly as the RBS group received money from the USA government via its rescue package – TARP – for its companies in America.

I went on to point out that there seems to be a similar case at the moment in respect of Santander bank. Like RBS group, Santander describes itself as a global and multinational bank. In its case it is based in Spain. However one of its companies is Santander bank in the UK, which is registered in London. I asked Mr Darling which government would have the responsibility for Santander UK, if the Santander group was to suffer a financial crisis? Would it be the UK government or the Spanish government?

His response? Well, to my disappointment, Mr Darling did not reply at all. Instead I got a long winded email from a Nigel Anthony, Research and Engagement Officer, Better Together. In this response there was only one, single reference to RBS – The total support provided to RBS in 2008 would have been the equivalent of 211 per cent of Scotland’s GDP. Now despite Better Together’s dodgy record with numbers, I am prepared to accept this figure. However, it has absolutely nothing to do with my questions. Mr Anthony’s reply did not at any point make any attempt to provide some of the clarity they so demand of others. In fact from reading his reply, no-one could guess what the questions were. He just ignored them and dished out a dash of propaganda.

Very disappointing from the No campaign and even more disappointing that Mr Darling is happy to approve of this kind of shoddy and disdainful way to respond to a question from a member of the public. Then again, perhaps not. The last thing that Project Fear want is to be forced to answer direct questions. Much easier to just spread lies and scare stories to tame journalists.

One response to “Alistair Darling and the RBS”